1 glass of wine with the RheinMainCard

The Hochheim Wine Museum is the first of its kind in Hessen. It vividly provides information about the work of a winegrower from vineyard cultivation to wine-bottling.

If on your own, on a guided tour, or an event in a museum atmosphere: Experience historic wine-making in an extraordinary way. 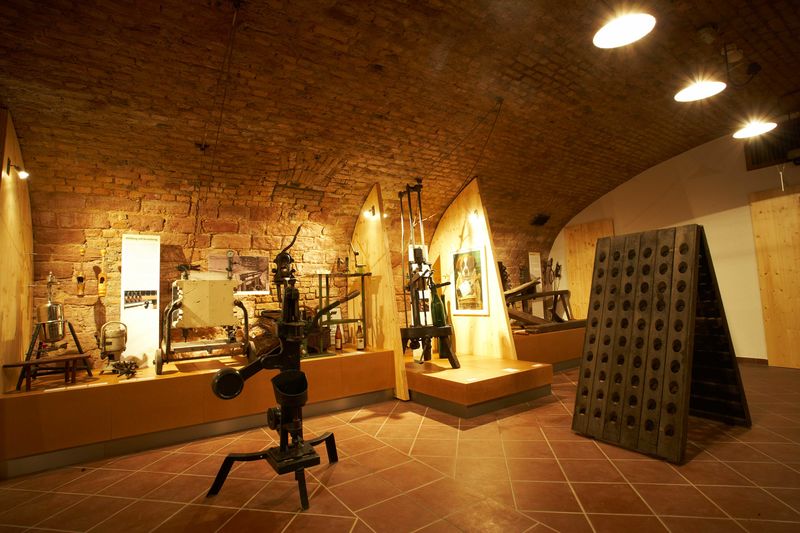 In the left cellar vault, outline maps show the vineyard sites in Hochheim. Important soil components, such as loess and clay marl, are presented in glass vessels and can be actively explored. In addition, the winegrower’s work in the vineyard is shown throughout a year. Single exhibition bunks host working tools of traditional handcrafts as well as newer tools, which were used for soil management, vine nursery, the planting, and cultivation of the vine grapes, pest management as well as harvesting. Despite diverse tool usage, pruning, fixing the plants onto the espaliers and picking the vines in steep locations has to be carried out by hand up to the present.

The right cellar vault depicts the work in a wine cellar. You can see, among other items, the decimal scale of the wine cooperative Hochheim which was used until 1979 and a wooden “Bütt“, a vessel which is carried on the back to collect the picked vine grapes. Furthermore, the significant sparkling wine production in Hochheim is referred to, which dates back to the year 1832. At the start of the 19th century there were seven sparkling wine cellars, of which Burgeff & Co. the biggest in the German Empire.

In the middle cellar vault, wine tasting glasses, labels and the crown of Hochheim’s first wine queen commemorate the history of the Hochheim Wine Festival. Visitors of the museum can immerse themselves in expert literature and wine magazines at the inviting long wooden table.

Wine has been cultivated in Hochheim for centuries. Our hosts guide you through the museum and bring the history of local wine cultivation to life. Guided tours usually last for one hour. A focus on a specific topic can be provided on request. Guided tours are 60,- Euro for a group up to 15 people, including the admission fee, 0,1l of coronation wine, any additional person pays 3,00 Euro.

The Wine Museum welcomes regularly to interesting events related to wine cultivation. The series of events "Weinbaumuseum am Sonntag" (Wine Museum on Sunday) enables the visitors to experience wine cultivation from different angles every 3rd Sunday of the month.

On the last Thursday of the month the Hochheim Wine Museum opens its doors for the "Weinbaumuseum am Abend" (Wine Museum in the evening) with a topical wine tasting of eight different wines. Hendrik Ruitenberg, one of Hochheim Wine Museum volunteers, tells exciting details about the wine and its makers in a cosy atmosphere, starting at 19.30h.

See the event calendar for upcoming topics and dates.

Since Oktober 2010 the Hochheim Wine Museum, which is based on funds of the Otto-Schwabe-Local Museum, has been situated in the Hochheim “Haus der Vereine“ (clubs’ and associations’ building). It is located in the vault cellar, which was built in 1902 and used to serve as a wine cellar for the Frankhof-Winery.